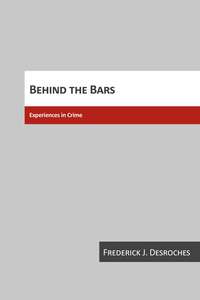 Bank robbers. Who are they? Where do they come from? What motivates individuals to commit these crimes?

Behind the Bars: Experiences in Crime examines these questions in this intriguing study of the life situations, relationships, and value systems of people who commit serious crimes.

Based on eight years of research with law enforcement officials, the media, and interviews with more than eighty Canadian and American bank robbers, Behind the Bars goes behind the facelessness of the crime itself and into the hearts and minds of the offenders.

Meet an ex-police officer, drug addicts, compulsive gamblers, a senior citizen, two con-authors, an exotic dancer, family men, informants, and career criminals. Their strikingly candid stories will inspire a great range of emotions, but most of all they will provide greater understanding of criminal behaviour.

Frederick J. Desroches humanizes the offender by shedding signficant light on the social and economic conditions of offenders; on the dynamics of criminal partnerships; and on the problems many of these men experience and bring on themselves.

Desroches balances the passion of criminals' stories with thematic and theoretical overviews of specific issues to create an exciting account that will capture the attention and imagination of any reader who has ever wondered why criminals commit crimes.

Chapter One: Need and Greed - The Motivation to Bank Robbery
Senior Citizen
When Need Turns to Greed
Planning to Get Married
Exotic Dancer

Chapter Two: Learning from Others - The Tricks of the Trade
Young Offender
Native Indian
Papa was a Rolling Stone
Travelling Bandit

Chapter Three: From Bonnie and Clyde to Kojak: The Influence of the Mass Media
Fun with Dick and Jane
Bonnie and Clyde vs Kojak
Counting the Dough
The Relaxe Bandit
Lost Love

Chapter Four: Nothing to Lose - The Tragic
The Reluctant Robbers
John Wayne
Sad Sack Loser
The Hunchback of Notre Dame
That Wanderless Feeling
Death Wish
Outlaws on the Run

Chapter Eight: Violators of the Code - The Informants
The Swamp Gang
Informant
Jimmy the Rat