Race and Sport in Canada 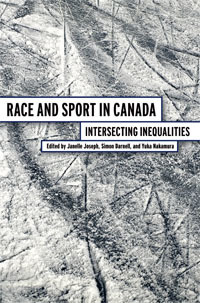 Race and Sport in Canada: Intersecting Inequalities is the first anthology to explore intersections of race with the constructions of gender, sexuality, class, and ability within the context of Canadian sport settings.

Race and Sport in Canada will be of interest to the general reader as well as to instructors and students in the fields of sport studies, sociology, critical race studies, cultural studies, and education.

Part One: Historical Approaches to the Study of Race in Canada
1. Sport and the Canadian Immigrant: Physical Expressions of Cultural Identity within a Dominant Culture, 1896-1945, Russell Field
2. Football and "Tolerance": Black Football Players in 20th Century Canada, John Valentine and Simon Darnell
3. Hockey and the Reproduction of Colonialism in Canada, Andreas Krebs
4. New Racism and Old Stereotypes in the National Hockey League: The "Stacking" of Aboriginal Players into the Role of Enforcer, John Valentine

Part Two: Canadian Immigration and the Study of Race and Sport
5. Gender, Immigration, and Physical Activity: The Experiences of Chinese Immigrant Women, Xin Huang, Wendy Frisby, and Lucie Thibault
6. Understanding Structural Barriers in Amateur Sport and the Participation of Immigrants in Atlantic Canada, Lori A. Livingston and Susan Tirone