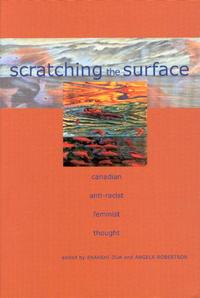 Scratching the Surface brings together 14 anti-racist feminists who examine ways in which race and gender interact to shape the lives of women of colour in Canada. This collection of articles covers a broad range of topics such as the impact of colonialism and its associated discourses on First Nations and other groups of colonized women; racism in the Canadian labour movement; the impact of globalization on women of colour; the ways in which the institution of the nuclear family shapes racism; sexism in communities of colour; and the ways in which the women's movement can create an anti-racist praxis. The book not only provides exciting new insights into how women of colour experience Canadian society, but also provides instructors with a textbook that integrates anti-racist and feminist approaches.

Back to the Drawing Board


Part I: Colonialism and the Historical Construction of Gender

Chapter One: The Discourse of Empire and the Social Construction of Gender
Linda Carty

Part II: The Post-Colonial Economy and the Consolidation of Racialized Labour Markets

Chapter Four: Do You Call Me "Sister"?: Women of Colour and the Canadian Labour Movement
Ronnie Joy Leah

Chapter Five: Restructuring at the Margins: Women of Colour and the Changing Economy
Christina Gabriel

Part III: The Canadian State and the Institutionalization of Race and Gender Relations

Chapter Nine: Beyond Diversity: Exploring the Ways in Which the Discourse of Race has Shaped the Institution of the Nuclear Family
Enakshi Dua

Chapter Ten: A Question of Silence: Reflections on Violence Against Women in Communities of Colour
Himani Bannerji