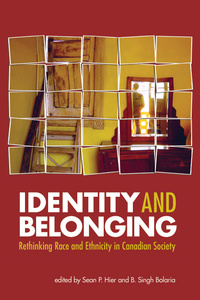 Canadian society is rapidly evolving. By 2017, persons belonging to a visible minority group will comprise 20 percent of the population. In Canada's major cities, the proportion of persons classified as visible minority is expected to exceed 50 percent.

Canada is a country that is not very sure of its own identity. Many of our citizens do not know where they fit in the national fabric. As ethno-racial diversity increases, so will our uncertainty of our identity and role in the development of our nation.

While Canada has always been culturally diverse, the continuing ethno-racial diversification will exercise a profound influence on Canadian culture, as well as on Canadian political and social institutions. As the ethno-racial composition becomes more complex, critical understandings of race, ethnicity, identity, and belonging are increasingly important goals for social justice, fairness, and inclusion.

Provocative and ground-breaking, Identity and Belonging addresses these concerns, poses some essential questions about the nature of race and ethnicity, how they differ from one another, and how they might differ from other markers of identity, such as class, gender, or nationality.